The young and less educated are more fascinated with innovation?

While running an errand just now, I was listening to NPR. They had an interview with a scholar about his annotated history of the works of the poet T.S. Eliot. All sounded rather interesting. They focused in part on Eliot as a fulcrum poet, i.e. between the US and UK, between past and future. The scholar made some comment about how we focus so much more on innovation today than we do on preserving tradition.

The result was interesting with Ngram showing a direct inversion of Google Trends. 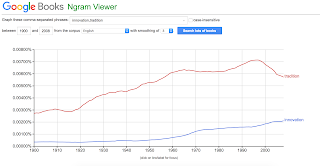 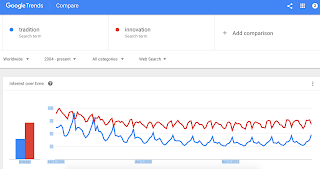 In books, tradition is referenced nearly three times as often as innovation. In contrast, among google searches, people are interested in innovation nearly twice as much as they are about tradition.

Interpretation? I struggle to come up with an adequate one. Book writers are almost certainly, on average, more intelligent, grave, educated and older than the average google searcher. Perhaps age reflects a different focus on the value of tradition over the novelty of innovation. I really don't know. But the fact that it is so strongly inverted is, in itself, interesting.