Much ado about nothing

In the post-election hysteria, there are all sorts of claims circulating that there has been an increase in classroom bullying and in hate crime in general. I have viewed these claims as emotional reactions and simple nonsense arising from cognitive dissonance. There is no national database of bullying incidents as far as I am aware. The FBI does release annual reports on hate crimes but, again, as far as I am aware, no monthly or weekly reporting. People making these claims are simply conjuring anecdote and vaporous imaginings to revile the winners of the election.

The basis for the claims of spikes in bullying and hate crimes are simply anecdotes. Whether there has been a hate crime spike is further clouded by the fact that so many of the reported incidents appear to be false flag operations, i.e. left wing groups committing apparent hate crimes in order to make it appear that there is a spike. Reason Magazine's Elizabeth Nolan Brown has a run down of the various Hate Crimes, Hoaxes, and Hyperbole: A reality check for all sides.

The Southern Poverty Leadership Center has their own reporting and are claiming 867 hate crime incidents since the election. Given that there were only 5,850 hate crime incidents in all of 2015, it would seem unlikely that there would be nearly 15% of that rate in the three weeks since the election. In addition, when you get in to the details of SPLC reporting, saying mean things is a hate crime and many of the groups reported are left wing groups, i.e. clearly not Trump related.

SPLC has a tweet with a map showing where hate crimes are occurring: 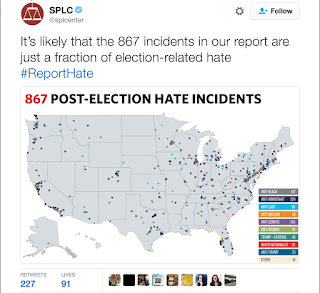 I love maps as a form of communication but they have their limits. In this case, it generally looks like there is a broad scattering of hate crimes across the country.

But there is a different, more analytical way of looking at this based on the numbers. From the blogger Random C. Analysis,

So I guess it's a little too late for Southern Poverty Law Center to change their name, eh? https://t.co/f3ppcoC3Tm pic.twitter.com/K9Ne8vMFOR

So the states where Clinton won have, on average, higher levels of hate crime per 100,000 people. The highest levels of bigotry are occurring in Blue States. That's what the data says and contradicts the narrative being pushed.

My guess is that there has been no increase in hate crimes, or at least no increase beyond the normal noise in the system. SPLC's numbers are grossly exaggerated and include numerous false flag incidents. The data analysis suggests to me that the elevated number of incidents in Blue States is not evidence that Democrats are the people with more bigotry and violence. Rather, I suspect the data says that Blue States are where there are a lot of false flag incidents.