From Why Northerners Are Born Earlier In The Year Than Southerners by Jennifer Welsh.


This isn't a new idea: we've known that, in the U.S. birth rates peak around the fall. And we've seen similar peaks in other countries.

But we've never looked at it on a state level and we've never had data before comparing so many nations before. This is the largest birth data set ever compiled. More than 750 million births from more than 200 countries were included in the new analysis.

See the chart below, which contains data from more than 730 million births in the last 78 years from the Northern Hemisphere. The right-to-left axis is the month of the year — from March (3) to December (12). The bottom-to-top axis is the latitude from the equator of the country or state in question. 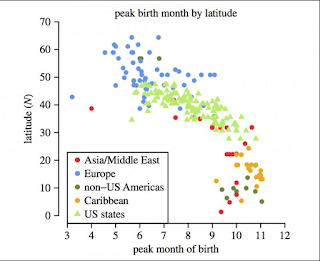 Interesting. The data seems to indicate that the phenomenon is real but we don't have any adequate hypothesis regarding causation. Just a grab-bag of the usual suspects. Well, mostly.