The last I heard of him, he was in a cornfield close by our lines, with a pistol in each hand, and the enemy had formed a line each side of him

In the turmoil and confusion, Sullivan struggled to hold control and keep his men from panicking. Their situation was desperate; retreat was the only alternative, and in stages of “fight and flight,” he lead them as rapidly as possible in the direction of the Brooklyn lines.
Those left to hold the ridge had by now been overrun by the Hessians. Green-coated jaegers (literally, huntsmen) and the blue-coated grenadiers with their seventeen-inch bayonets had moved up through the steep woods of the ridge—the “terrible hills”—as swiftly and expertly as any Virginia rifleman. So suddenly did they appear that the Americans had time to get off only a shot or two, or none at all. Some fought back, wielding their muskets and rifles like clubs, before being run through with bayonets. Some pleaded for mercy. “Their fear of the Hessian troops was…indescribable,” wrote General von Heister. At the very sight of a blue coat, he said, “they surrendered immediately and begged on their knees for their lives.” Those who could get away fled back down through the trees and out into the open, only to run headlong into a hail of British fire.
At the same time, the whole left side of the American line collapsed. Thousands of men were on the run, hundreds were captured. Sullivan held back, in an effort to see as many as possible to safety, and amazingly most of the men succeeded in reaching the Brooklyn lines.
Sullivan, however, was captured. An American soldier named Lewis Morris, who himself barely escaped, wrote of Sullivan in a letter home. “The last I heard of him, he was in a cornfield close by our lines, with a pistol in each hand, and the enemy had formed a line each side of him, and he was going directly between them. I like to have been taken prisoner myself.”

Posted by Charles at 3:02 PM No comments:

From The Big Sleep by Raymond Chandler.

Posted by Charles at 2:42 PM No comments:

HURRAY - Hermippus has just received his salary of five drachmas for planting trees - exactly 2276 years ago!

His payslip still survives with the original seal on its back @BLMedieval Papyrus 2345#TuesdayMotivation #GoodNewsTues #EmployeeExperience pic.twitter.com/bSE5eMiWM3

Posted by Charles at 1:41 PM No comments:

So long as different demographic groups commit crimes at different rates, the criminal justice system will be riddled with disparities. For some reason, we all understand this when comparing men to women. But we lose our collective minds when comparing different ethnic groups.

Dust devil and a volcano eruption at the same time..🌪🌋

But I would move that tent...

Mega-Analysis: Greater male than female variability in brain structure is present by one year of age (N = 16,683)

"Our findings that these sex differences are present in childhood implicate early life genetic or gene‐environment interaction mechanisms."https://t.co/H8RDXQsuIU pic.twitter.com/VEFYLgfnl6

Posted by Charles at 9:26 AM No comments:

Trust comes on foot and departs on horseback.

We've spent generations building societal trust and our leading heights institutions have been racing around stampeding the horses away.

Posted by Charles at 8:39 AM No comments:

Twilight in the wilderness, 1860 by Frederic Edwin Church

Twilight in the wilderness, 1860 by Frederic Edwin Church 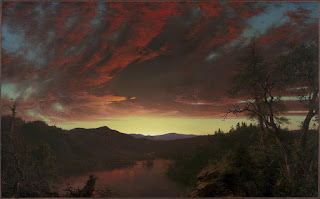 Posted by Charles at 8:19 AM No comments:

I was searching on the Neely family in South Carolina and came across this entertaining vignette in which she is a mere cameo.  The story is in Caldwell Family by George E. Phelps, which I came across very indirectly.

William Caldwell and Rebecca, his wife, were immigrants from Ireland. They first located themselves in Pennsylvania, thence the tide of emigration setting southwardly, carried them to Virginia, where they arrived about 1749.

I am informed that the ancestors of Mr. Caldwell were of French origin; that they were Huguenots, who fled from France in 1685, at the revocation of the edict of Nantes; part settled in Scotland, another part in Ireland.

In 1770, the widow, Mrs. Rebecca Caldwell, and her numerous family, removed to and settled on Mill Creek, in Newberry Dist.

Mrs. Rebecca Caldwell and her daughter Elizabeth, participated in the Revolutionary cause in the following incident in the year 1781 or 1782, (probably the latter) a lad, James Creswell, afterwards Colonel Creswell, remarkable for his active hostility to the Tories, was at Mrs. Caldwell's (Rebecca). A negro gave the alarm that Tories were approaching; in an instant the old lady directed her daughter Betsey (Elizabeth) to hide herself, and Creswell to dress himself in clothes of her daughter, which she furnished. This being done, as the Tories were approaching the house, she ordered her own horse and that of her daughter Betsey's to be saddled, as she was compelled to visit Mrs. Neely. No sooner said than done; Sambo had the horses at the door. The old lady called '’Betsey come along." said she, "I am in a hurry." Out walked Creswell in Betsey's toggery, her bonnet slouched over his face covered his features; he and the old lady mounted in the presence of the Tories, and away they went to visit Mrs. Neely, while the Tories set about searching for Jimmy Creswell; but they searched in vain; they found the true Betsey, and then became aware that Creswell had escaped; they soothed themselves by sweeping pretty much all Mrs. Caldwell's household goods.

One of them swore he thought Betsey took mighty long steps, as she went to her horse.

While my intent was to find information on Ms. Neely, this illustrates what happens unexpectedly frequently.  Go back a few generations and there are all sorts of connections among families.  I have 5th great grandfather James Caldwell (1724-1804, Virginia).  Mrs. Rebecca Caldwell was incidental to my search for Mrs. Neely but I suspect I'll find her to be a distant cousin.

Posted by Charles at 6:14 PM No comments: