All the news that fit to be imagined

I really like the New York Times as a news dissemination engine even though I object to their role as a political partisan in the civic discourse.

I comment often on the role that cognitive bubbles play in determining how we think about things and I have commented also that I suspect that much of the apparent bias in the NYT is likely a function of unconscious cognitive isolation. They think what is important among highly educated, highly compensated people in New York must be the same for the nation at large.

I came across this interesting tidbit.

OK, its the NYT. In some ways not too surprising. But it is worth digging deeper.

My first question is whether this is simply a function of hysteria around Trump's election. The NYT is full of articles about how Trump and his supporters are racist, misogynist, homophobic and islamophobic. I did a search at the site Olson uses and came up with these results. 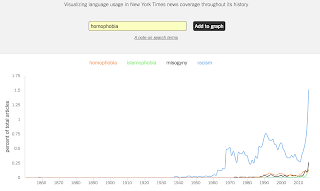 Well, it does look like the rise of Trump is correlated with the NYT talking about racism, islamophopbia, misogyny, and homophobia. Citations are up for each. Racism is up 74% from 2015, islamophopbia up 46%, misogyny up 160%, and homophobia up 56%. Woof. But that's not quite the full story.

When was the most recent low point for mentions for each of these items? Racism was only 0.27% of the time as recently as 2011 and mentions have increased 459% since then. Homophobia was almost gone in 2008 when it was mentioned only 0.03% of the time but mentions have increased 367% since then. Misogyny was also vanishingly small in 2010 when it gained mentions in only 0.02% of articles but has now rocketed up 1200% since then. Islamophobia was hardly on the radar screen as recently as 2013 (0.01% of articles) but now has also increased 1200%.

Have things really gotten so bad, so quickly? Well, not if you look at the FBI hate crime reports which show ups and downs of +/- 5% in any of those years on a very small base (about 5,000 such crimes a year versus some 2 million violent and property crimes.) Is there another way to check? Well, there's always NGRAM Viewer and Google Trends.

NGRAM Viewer only goes to 2008 and it shows a sharp dip in discussions about racism in recent years and a modest drop from a low base for discussions about homophobia and misogyny which had gained some modest currency in the late 1980s and early 1990s before starting to fall. Islamophobia simply isn't on the radar screen in that time period. 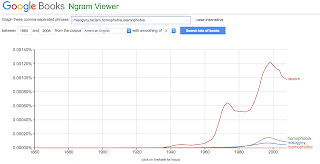 Google Trends (what people are searching about) shows a reasonably similar picture since its inception in 2004.


All negative terms are flat or trending down up till late 2012. From 2012 onwards there has been a slow rise in searches on racism and misogyny but nothing too dramatic. Homophobia and Islamophobia are pretty flat through this period.

If we adjust the timeframe to only the past couple of years, it is much the same with the exception of the week of the election when searches about Racism and Misogyny shoot up before falling back dramatically.

Net is that either from crime statistics or based on what people are talking about, there isn't much empirical change or fresh concern about racism, misogyny, homophobia, and islamophobia. The crimes aren't there and the public is not discussing these issues. That suggests to me that the results for the New York Times reflect not an objective reality but reflect the concerns of those who write for the NYT. Concerns not shared to the same degree by their fellow Americans. I'd say this likely supports the bubble theory.