The NYT reporter who cried wolf

From How Stable Are Democracies? ‘Warning Signs Are Flashing Red’ by Amanda Taub. The article is sloppily researched and seems to be shoehorned into a pre-existing critical theory, postmodernist, SJW, identity obsessed world view. The fact that she has removed all information from her LinkedIn account seems consistent with that. Hunting around a little on the web produces a slew of such articles and a description of her as a lawyer, academic and NYT columnist, all of which are supportive of the supposition. My inference when I read the article was that it was simply another Trump Derangement Syndrome article of which we have seen so many in the past month.

There was, however, a veneer of an argument.


Yascha Mounk is used to being the most pessimistic person in the room. Mr. Mounk, a lecturer in government at Harvard, has spent the past few years challenging one of the bedrock assumptions of Western politics: that once a country becomes a liberal democracy, it will stay that way.

His research suggests something quite different: that liberal democracies around the world may be at serious risk of decline.

Their conclusion, to be published in the January issue of the Journal of Democracy, is that democracies are not as secure as people may think. Right now, Mr. Mounk said in an interview, “the warning signs are flashing red.”

OK. An interesting hypothesis with plenty of anecdotal supporting data, but how about rigorous evidence? Taub does lay out some interesting research but it is all substantially speculative or, more kindly, exploratory.

One of the two case studies is undeniable. Venezuela was a prosperous but fragile democracy which was subverted by totalitarian socialism. It is no longer a democracy, though they have show-elections, and it is no longer prosperous.

The second case study is more equivocal - Poland. Poland, since emerging from behind the Iron Curtain, has had a robust and contentious democracy with more than enough fringe groups, far left/far right/autocratic to raise concern. Rough-and-tumble or fragile? Hard to tell but it is still a functioning system.

What else is there in terms of evidence for the thesis? Well, not much. But it was just enough to get to what was probably the real point. To raise concern over the American election results.


According to the Mounk-Foa early-warning system, signs of democratic deconsolidation in the United States and many other liberal democracies are now similar to those in Venezuela before its crisis.

Support for autocratic alternatives is rising, too. Drawing on data from the European and World Values Surveys, the researchers found that the share of Americans who say that army rule would be a “good” or “very good” thing had risen to 1 in 6 in 2014, compared with 1 in 16 in 1995.

That trend is particularly strong among young people. For instance, in a previously published paper, the researchers calculated that 43 percent of older Americans believed it was illegitimate for the military to take over if the government were incompetent or failing to do its job, but only 19 percent of millennials agreed. The same generational divide showed up in Europe, where 53 percent of older people thought a military takeover would be illegitimate, while only 36 percent of millennials agreed.

In the United States, Donald J. Trump won the presidential election by running as an antisystem outsider. And support for antisystem populist parties in Europe, such as the National Front in France, Syriza in Greece and the Five-Star Movement in Italy, is rising.

As part of this, there is this alarming and compelling graphic: 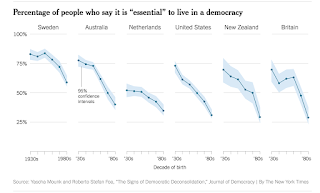 Looks terrible doesn't it? Another way of looking at it is that it seems too neat a support of an otherwise unsupported thesis. I have lived in Sweden, Australia, USA, and Britain and I have worked in the Netherlands and New Zealand. I have friends in all those countries. Certainly there is electoral irritation with the existing governing parties and entrenched interests but also certainly no disavowal of democracy. And certainly there is nothing like the institutional weaknesses of other countries I have lived in where there are real failures of democracy such as Venezuela, Nigeria, and Libya.

I originally saw Taub's mess and considered blogging about it but decided to forgo. I have written too many critical posts about the press lately. But then it began to get some traction, driving conversations in certain hot-houses of thought.

But very fortunately, there then came along Pippa Norris with a series of tweets calling into question Taub's original data interpretation. Among them,

Even better, Max Kennerly, a lawyer blogger did a deep dive on the underlying data issues to substantially overturn the Taub thesis that democracy is in danger and that Trump is a herald of democratic decline. His post is: Younger People Are Actually More Supportive Of Democracy


Here’s the good news: it’s not true. No one was even asked if it was “essential to live in a democracy.”

There are lies, damned lies, and statistics. Let’s see how this all went wrong.

The whole thing is worth a read.

The price of liberty is eternal vigilance but Taub is playing the role of the boy who cried wolf, simply because she does not like the results of the election which soundly rejected people of her ilk.