Journalists have become accustomed to the anodyne and so the real appears alarming.

In the Washington Post and New York Times, as well as on NPR, I am hearing and seeing a lot of discomfort with Donald Trump's progression of appointments. There is alarm about their inexperience in government, their potential conflicts of interest from past career roles, their wealth, their baldfaced accomplishments. This seems strange. Why the concern over such accomplished individuals?

Part of this is simply the continued grief processing - the objections come down to the fact that Trump is not appointing the type of individuals whom the clerisy would have expected and wanted to have been appointed had his opponent won.

But listening to some of the commentary on NPR today, it occurred to me that there might be something further going on. It is hard to maintain a running record of all the events and controversies over time but it is useful to do so.

Taking all those objections into account, Cembalest upped his numbers to 20% with any sort of business experience. 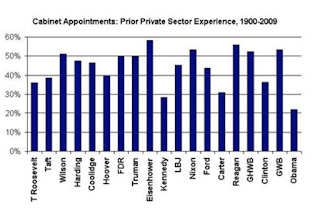 20% was more than Cembalest started with but it was still dramatically less experience than any other cabinet in the past century.

I have no idea what the numbers might look like now with two terms of cabinet members to include. I can't recall any private sector individuals with any leading role.

Ok, I did a quick search. Of the current or recent members of the cabinet virtually all of them come from a government, legal, or academic background - Robert Gates, John Kerry, Hillary Clinton, Loretta Lynch, Eric Holder, Tom J. Vilsack, Ashton B. Carter, Thomas E. Perez, Sylvia Mathews Burwell, Julian Castro, Anthony Foxx, Ernest Moniz, Arne Duncan, and Jeh Johnson. Only three, Sally Jewell, Penny Pritzker, and Robert McDonald, seem to have any private sector experience and Pritzker's is that of an heiress of a family fortune.

Whatever the percentage number might be, it is clear that for eight years we have had a cabinet that was constituted primarily of politicians, lawyers and academics. That is a pretty narrow slice of the entire American experience.

Remembering that puts the current fretting about Trump appointees into context. Most journalists are not accustomed, based on the past eight years, to viewing cabinet members as 1) accomplished in their own right in the real world, 2) coming from the real world, and 3) having real world trappings in terms of wealth and track records of consequential decisions for which they had responsibility.

If you are a journalist accustomed to the new norm where all cabinet members are politicians (or bred from law or the academy), then likely talented people from the private sector and big, competitive organizations probably do appear to be strange, and perhaps frightening, beasts. Journalists have become accustomed to the anodyne and so the real appears alarming.

UPDATE: There is another aspect of this phenomenon. I think there is a tendency on the part of journalists, who lean left and often take a statist view of the world, to accept as a principle that people coming out of government, law, and the academy, are in some way birthed in innocence. They seem to think that if you are in the public sector, you are a dedicated public servant with morals above reproach and beyond the tawdriness of conflicts of interest.

Of course that is not true. Statists are as subject to conflicts of interest as everyone else. The tax-paying public are tired of seeing public employees and elected officials retiring with fortunes in the millions and pension plans in the hundreds of thousands. Everyone can be bought, whether they acknowledge it by taking money directly (bribes), indirectly (looking at you Clinton Foundation), remotely (insider information and favored deals) or alternately (revolving doors between government and business).

So the horror of journalists regarding accomplished business people seems to be rooted in 1) lack of familiarity owing to over-reliance on statists over the past decade, and 2) naive assumptions about relative corruptibility between people in business and people in government.

That seems the most likely explanation for why journalists seem to find it appalling and inadequate that Trump will be turning over his business interests to his children to run while those same journalists seemed perfectly sanguine with the plan to turn the Clinton Foundation over to the daughter of Clinton. In terms of potential conflict of interest, both courses of action are substantively the same.