From Family, Politics and the Holidays from PRRI. The cruel interpretation of the following results is that Republican Men are nearly four times more tolerant than Democratic Women. 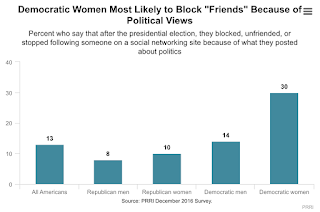 More seriously, I wonder whether this represents reality, and if so, to what degree?


Only 13% of the public say they blocked, unfriended, or stopped following someone on social media because of what they posted about politics. Again, sharp political divisions emerged in the tendency to remove people because of the political opinions they expressed.

Nearly one-quarter (24%) of Democrats say they blocked, unfriended, or stopped following someone on social media after the election because of their political posts on social media. Fewer than one in ten Republicans (9%) and independents (9%) report eliminating people from their social media circle.

Political liberals are also far more likely than conservatives to say they removed someone from their social media circle due to what they shared online (28% vs. 8%, respectively). Eleven percent of moderates say they blocked, unfollowed, or unfriended someone due to what they posted online.

There is also a substantial gender gap. Women are twice as likely as men to report removing people from their online social circle because of the political views they expressed online (18% vs. 9%, respectively). Notably, the gender gap also differs significantly across political affiliation. Three in ten (30%) Democratic women say they removed an individual from their online social network because of a political opinion they expressed, while only 14% of Democratic men reported doing this. Republican men and women are about equally as likely to say they blocked, unfollowed, or unfriended someone on social media because of political posts (10% vs. 8%, respectively).

I am guessing that the framing of this overstates the significance. Yes, Democratic Women are far more intolerant of Republican Men but blockers overall are a tiny minority, only 13%. What is the sample size once, you are looking only at blockers and then adding two further conditions (Gender and Political Affiliation). I bet the numbers are so small that the four to one ratio is meaningless.

More specifically, and for demonstration purposes only, let's say that there were 1,500 survey respondents, that 60% of the population identified as affiliated with a party, that the party affiliation was equal between Democrats and Republicans and finally, that the gender divide is 50:50. That translates to 29 Republican Males who blocked friends out of a total sample of 1,500. Once you have the three levels of contingence (party affiliation, gender, blocking habits) you are at such a small sample size that the meaningfulness is questionable.