Why the disconnect between media interests and citizen concerns?

From What Americans Care About vs. What the Media Cares About by Jon Gabriel. Rigorous this is not but interesting none-the-less.

Determining what the public cares about is notoriously challenging not least because there are several ways to go about it, each of which is legitimate, but each of which provides materially different answers. For example, these six questions seem to all be getting at the same general issue (what are the big problems) but the different phrasing and different technique of ordering them will provide different outcomes: 1) What are the most important problems facing America today?, 2) What are the most important problems you face today?, 3) From this list of problems, which do you think are important to the US right now?, 4) How would you rank this list of 10 problems?, 5) How would you allocate 100 points across this list of 10 problems?, 6) What are the problems you think your neighbors are most concerned about? etc. 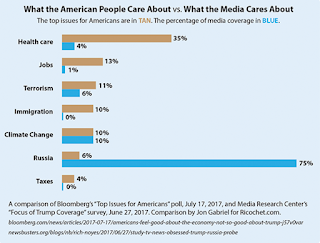 Russia? Pfft. Its a nothing burger. According to citizens.

Jobs and the economy? Pfft. Its a nothing burger. According to the press.

This a clever observation on the part of Gabriel. Again, there are challenges with the data, the measurement, and the framing. But this is broadly consistent with other analyses I have seen.

The mainstream media is fascinated by Russia (in terms of the election) and in Climate Change. Citizens are interesting in Russia and climate change but at a peripheral level. In contrast, citizens are highly focused on jobs, healthcare and taxes whereas these are vestigial issues to the mainstream media. 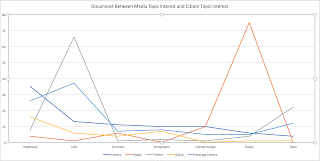 This prompts a couple of interesting questions. 1) Why are the media not focusing on what their consumer are most interested in? 2) Why, given the attention lavished by the media, are citizens not interested in Russia and climate change? I think I know the reason but it is interesting to see how big the disconnects are between the interests and concerns of citizens and the topics of interest to the chattering classes of the urban media.