The Gell-Mann experience of Ankhesenamun

There has been much discussion about Fake News in the past year. News that is deliberately reported in a biased and incorrect fashion has been the principle point of discussion, mostly in the context of the 2016 election.

But there is a second type of Fake News which is perhaps even more common, that which is reported without knowledge or skepticism on the part of the journalist. Obama White House Deputy National Security Advisor for Strategic Communications Ben Rhodes gained notoriety for bragging about his ability to manipulate the press. Why was it so easy?


The average reporter we talk to is 27 years old, and their only reporting experience consists of being around political campaigns. That’s a sea change. They literally know nothing.

And it is not only in the political arena. It can be anything.


Media carries with it a credibility that is totally undeserved. You have all experienced this, in what I call the Murray Gell-Mann Amnesia effect. (I refer to it by this name because I once discussed it with Murray Gell-Mann, and by dropping a famous name I imply greater importance to myself, and to the effect, than it would otherwise have.)

Briefly stated, the Gell-Mann Amnesia effect is as follows. You open the newspaper to an article on some subject you know well. In Murray’s case, physics. In mine, show business. You read the article and see the journalist has absolutely no understanding of either the facts or the issues. Often, the article is so wrong it actually presents the story backward—reversing cause and effect. I call these the “wet streets cause rain” stories. Paper’s full of them.

In any case, you read with exasperation or amusement the multiple errors in a story, and then turn the page to national or international affairs, and read as if the rest of the newspaper was somehow more accurate about Palestine than the baloney you just read. You turn the page, and forget what you know.

That is the Gell-Mann Amnesia effect. I’d point out it does not operate in other arenas of life. In ordinary life, if somebody consistently exaggerates or lies to you, you soon discount everything they say. In court, there is the legal doctrine of falsus in uno, falsus in omnibus, which means untruthful in one part, untruthful in all. But when it comes to the media, we believe against evidence that it is probably worth our time to read other parts of the paper. When, in fact, it almost certainly isn’t. The only possible explanation for our behavior is amnesia.

All this is prompted by an article I clicked through to this morning which is a good illustration of how badly things can go wrong when there is journalistic ignorance and poor editing.

The article was King Tut's Wife May Be Buried in Newly Discovered Tomb by Owen Jarus. I have a lifelong keen interest in archaeology and particularly in Egyptology. I am well read in the literature and a report such as this would be fascinating as King Tut ruled during a turbulent and transitional period at the end of the 18th Dynasty.

Tutankhamun's wife was Ankhesenamun, daughter of the Pharaoh Akhenaten. Akhenaten moved the capital to a newly founded city Akhetaten and abandoned the religious traditions of Egypt and brought in the worship of a quasi-monotheistic religion of the sun god Aten. On Akhenaten's death, the forces of tradition reasserted themselves, the capital reverted to Thebes and Ankhesenamun married her half-brother Tutankhamun who became Pharaoh.

While the religion reverted to the traditional gods, the artistic freedom that had been fostered under Akhetaten continued into Tutankhamun's reign. Among Tutankhamun's tomb furnishings, there are a number of renditions which include more casual, intimate depictions of Pharaoh and wife than we see at any other time in Egypt's history. It is worth remembering that Ankhesenamun and Tutankhamun were teenagers during his reign. She was only 21 at his death. 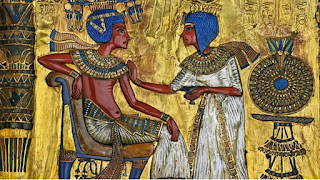 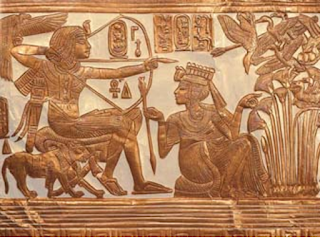 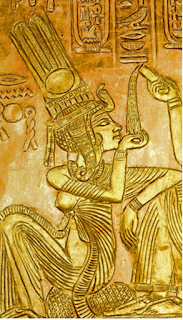 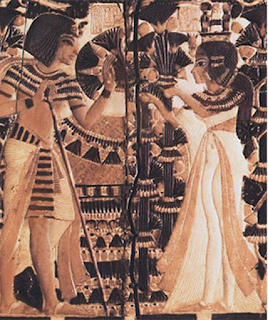 On Pharaoh Tutankhamun's death, he was succeeded by his Grand Vizier Ay. Ay married Tutankhamun's widow, Ankhesenamun. Her widowhood and remarriage marks one of those little glimmers into the world of the 14th century BC which chance and history occasionally reveal. In the Hittite archives, there is a correspondence with an Egyptian queen whose identity is not certain but might have been Ankhesenamun. From Wikipedia:


A document was found in the ancient Hittite capital of Hattusa which dates to the Amarna period; the so-called "Deeds" of Suppiluliuma I. The Hittite ruler receives a letter from the Egyptian queen, while being in siege on Karkemish. The letter reads:


"My husband has died and I have no son. They say about you that you have many sons. You might give me one of your sons to become my husband. I would not wish to take one of my subjects as a husband... I am afraid."

This document is considered extraordinary, as Egyptians traditionally considered foreigners to be inferior. Suppiluliuma I was surprised and exclaimed to his courtiers:


"Nothing like this has happened to me in my entire life!"

Understandably, he was wary, and had an envoy investigate, but by so doing, he missed his chance to bring Egypt into his empire. He eventually did send one of his sons, Zannanza, but the prince died, perhaps murdered, en route.

You can see why Jarus's King Tut's Wife May Be Buried in Newly Discovered Tomb could be so interesting. What historical questions might be answered and mysteries revealed?

But it was not to be. The article opens with:


Famed archaeologist Zahi Hawass and his team say they've found evidence of a tomb that could belong to King Tut's wife.

Uh oh. Hawass is a notorious self-promoter with a long track record of dubious archaeological science and even more dubious commercial activities. If this is the basis of your reporting, then tread carefully.

And indeed, the rest of the reporting is filled with weasel words and passive voice.


"We are sure there is a tomb there, but we do not know for sure to whom it belongs," Hawass told Live Science in an email. On July 7, National Geographic Italia published an article in Italian suggesting that a team led by Hawass had found a new tomb in the Valley of the Kings, and Hawass confirmed that discovery to Live Science.

"We are sure there is a tomb hidden in that area because I found four foundation deposits," Hawass said, explaining that the foundations are "caches or holes in the ground that were filled with votive objects such as pottery vessels, food remains and other tools as a sign that a tomb construction is being initiated."

"The ancient Egyptians usually did four or five foundation deposits whenever they started a tomb's construction," Hawass said. Additionally, "the radar did detect a substructure that could be the entrance of a tomb."

As for whose remains were buried there, Hawass said the tomb could belong to Ankhesenamun, who was the wife of Tutankhamun (reign 1336-1327 B.C.). Ankhesenamun married Ay after King Tut died, so it's possible that her tomb is located near Ay's, Hawass said.

This is sounding more and more like a carnival barker trying to attract the attention of punters willing to drop some money on further excavations.

This Fake News culminates in this classic Update. Remember, the whole point of the article was to report the discovered tomb of Ankhesenamun.


Update: In an email to Live Science on July 10, Hawass cautioned that until excavations take place, he can't say for sure that a tomb has been discovered, and it is still possible that there is no tomb. "It is all possibilities until we excavate," Hawass said.

Carnival barker it is. No tomb has been discovered and there is no reason to expect that it might be that of Ankhesenamun. Fake news that is simply the product of journalistic ignorance and lack of editorial oversight.