Productivity has increased dramatically and in a short time frame 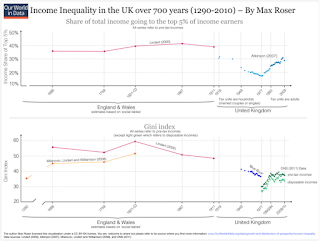 Excellent charting of what is a difficult to measure concept.

What is missing is the productivity dimension. Yes, income inequality is blessedly dramatically lower today than it was a hundred years ago. But that just measures the relative difference at the whole society level.

A hundred years ago, if you were in the bottom quintile, maybe the bottom two quintiles, you were border line starvation and even the middle income quintile was financially perilous. When everyone was working at such lower income, absolute income was a greater issue than relative income. It is only since we have become so prosperous so quickly that we have focused (mistakenly) on income inequality rather than what has always been the real root issue, productivity.

Looking internationally, Mexico today has an average per capita GDP about where the US was in 1950 (from memory). Again, most of us today know someone who can remember the 1950s.

The only point here is that the income in individual and national productivity has increased dramatically and in a short time frame. It is disorienting and easy to lose perspective. Yes there are still poor countries and poor people within countries but what those terms actually mean in real life circumstances are far different from what they meant fifty and a hundred years ago.