In A whopping 73 percent will spend a year in the top 20 percent of the income distribution, I point out how our discussions about income inequality so reprehensively omit any discussion of churn. There are two issues that I think are crucial in any perspective on any nation's income inequality. First is the churn rate. If everyone is moving in and out of different income levels, it argues that there is no cabal garnering and protecting elite powers restricted from everyone else. Second is the intergenerational chronic poverty level, i.e. poverty arising from endemic behaviors or practices that preclude escape from economic poverty.

In the blog post above, research by Mark Rank indicates that over a working lifetime, 12% of the US population will find themselves among the 1% in income for at least a year, and fully 73% will be in the top quintile for at least a year. That's a pretty impressive churn rate. Since there are no international measures of income churn rates though, it is hard to know how that compares to anyone else.

Measuring Poverty by Kiva Loaner passing along information from the US Census Bureau that begins to shed light on the second issue, chronic poverty. All the material is from the Census Bureau report, Dynamics of Economic Well-Being: Poverty, 2009–2011 by Ashley N. Edwards. Very interesting. Part of the challenge in conceptualizing poverty in the US is that absolute poverty exists but is rare and often related in tangled fashions to individual choices. Our relative rate hovers around 15% principally because the definition is tautologically relative. There is always a bottom 15%, no matter how much or little income they generate and regardless how much they receive in transfers from various support policies.

One way to get a look into poverty is to look at how long people spend in poverty, regardless of the absolute or relative level by which we define it. If we have 15% of the population who are always poor, we have a significant problem. If only 1% are chronically poor, then it is more manageable (though still possibly intractable).

The following chart indicates that while about 30% experienced poverty for two months during the peak of the Great Recession, only 3.5% were chronically in poverty over that period of 36 months. 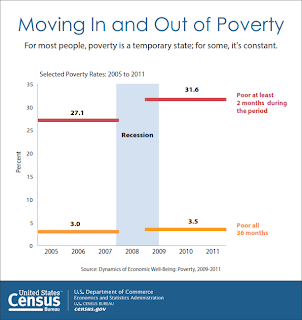 Here is a view of chronic and episodic poverty by demographic group. 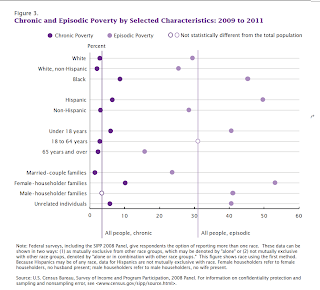 Really an interesting report throughout. My overall sense from the numbers is that we have about 1-3% of the population who are chronically poor, either disengaged from the economy or individually dysfunctional for a whole variety of potential reasons. On top of that we have another probably 10-15% who are economically fragile. They may not be in poverty for more than a few months at a time but they frequently oscillate in and out. I think those are probably two entirely different groups in terms of what might be the appropriate policies to help either elevate them out of chronic poverty or reduce the amount of episodic poverty they suffer. I think we have too long treated THE POOR as a statistical category with blunderbuss policies that probably as often exacerbate as ameliorate the problem.