From Explaining Postmodernism: Skepticism and Socialism from Rousseau to Foucault by Stephen R. C. Hicks. 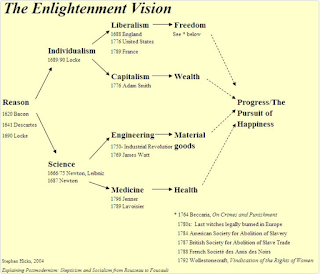 Such a clear road map. Many have copied but few actually implemented. Unstated is that it is a universalist model, believed to be applicable and beneficial for all people. With its emphasis on science, individualism, freedom, and universalism, I picture riots if the graphic were distributed on a university campus, at least those universities roiled by postmodernism, critical theory, gender studies, ethnic studies, etc.