For the end of that game is oppression and shame

From The Shouting Class by Noah Smith. AS is often the case, I'd adduce additional information, I nit-pick at some of his analysis, and I materially disagree with some of his conclusions. But he is writing about an interesting topic in a constructive fashion. Wish we had more like him.

Rather than try and construct a structured response, which would get too convoluted too quickly, I'd like to summarize his key points and then add some additional thoughts.


Nevertheless, there were some who were dissatisfied with the thread. A few dozen people on the left wrote to complain that I was engaging in "both-sides-ism", i.e. putting too little of the blame for the country's woes on the average Republican voter. Some accused me of being an apologist for racism and fascism. A smaller number of responders were alt-right types wrote that the stabber had been a leftist, not a rightist. Some of these responses reached 100 likes.

Seeing this, a thought suddenly occurred to me: the ratio of people who expressed support for the thread to those who expressed annoyance with it was over 20 to 1. But if you scrolled down the thread, the ratio of words devoted to support vs. words devoted to annoyance would be more like 1 to 100. Or pixels, or square centimeters of screen space, or whatever. In other words, the "annoyed" group, though far far smaller than the "supportive" group, grabbed a vastly larger amount of attention.

I call it the Shouting Class.

In Britain, they have had the Chattering Class for some forty years or more.


The chattering classes is a generally derogatory term first coined by Auberon Waugh often used by pundits and political commentators to refer to a politically active, socially concerned and highly educated section of the "metropolitan middle class", especially those with political, media, and academic connections.

I'd put a more vernacular spin on it - the chattering class are those small, small portion of the population who are desperate to express opinions on topics, no matter the domain of knowledge, with an end towards influencing policy and law.

This relates to a not commonly noted feature of surveys about climate (or, really, any other issue), the disconnect between ordinal ranking and generic concerns. For example, Gallup does a routine survey of what perceive as the most important issues; this is an ordinal approach. Climate change doesn't even make it on this most current survey (though the environment is the most important concern for some 2% of the population.) This is pretty standard. I don't think I have ever seen a survey that has had more than 5% of the population identify climate change as the most important problem. In this survey, the ordinal ranking of most important problems are: Bad Government (18%), Healthcare (18%), Immigration (7%) and Race Relations, the Economy, and Unemployment all tied in 4th place at 6% each.

On the other hand, if you ask for a list of concerns (i.e. not just the most important), climate change will almost always be among the concerns and will often show up among the top five or ten, and almost always will be among the top 20 concerns. For example, America’s Top Fears 2016 from Chapman University is reasonably representative. In this survey, Climate Change comes in at 17 of the top 20 concerns with 32% of respondents indicating they are afraid or very afraid of climate change. 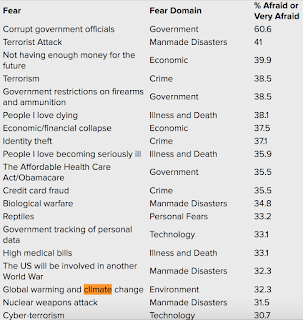 In this example, only 2% (generously) believe that climate change is the most important problem but 32% think it is a problem. A respectable number of people are concerned about climate change but their concern is not very intense.

Were we to focus only on the things the most people thought were most important, everything would be about improving the quality of government, improving security, improving the economy and improving health.

This is borne out by Google Trends. If you look at what people are searching about since 2004, it is fairly steady. Health (74% relative rate), Security (33%), Economy (6%) are right up there whereas topics of concern to the shouting classes such as climate change and transgender concerns barely register (2%).

The fundamental issue is that people are most interested about things most relevant to them but the Shouting Classes are desperate to attract attention to more abstract and remote things. And where do they shout? On social media.

Well, that's not the only place, but it is the primary avenue. We are seeing the same dynamic play out in the real world on college campuses such as Yale, Oberlin, Evergreen, Berkeley, University of Missouri, etc. where less than 5% of the student population is foisting repressive, racist, and intolerant behaviors onto the silent majority of students.

Coming back to Smith's observation on the relative disconnect between overall response and volume of words:

Concentrated benefits, dispersed costs is another critical concept pertinent to this discussion. It was identified by Mancur Olson in his classic The Logic of Collective Action. A small minority of participants can hijack the system to their narrow interest and benefit by concentrating their voices and actions at the expense of the great majority for whom the price to pay is a small nuisance. It is the heckler's veto exacting their tithe.

This approach to community organizing was articulated in Alinksy's Rules for Radicals and has been exceptionally powerful over the past three decades. Small groups can make absurd demands and get paid their Dane's Geld because they are simply a nuisance. This works once. But over time the cumulative burden builds up. As Rudyard Kipling observed


It is always a temptation to an armed and agile nation
To call upon a neighbour and to say: --
"We invaded you last night--we are quite prepared to fight,
Unless you pay us cash to go away."

And that is called asking for Dane-geld,
And the people who ask it explain
That you've only to pay 'em the Dane-geld
And then you'll get rid of the Dane!

It is always a temptation for a rich and lazy nation,
To puff and look important and to say: --
"Though we know we should defeat you, we have not the time to meet you.
We will therefore pay you cash to go away."

And that is called paying the Dane-geld;
But we've proved it again and again,
That if once you have paid him the Dane-geld
You never get rid of the Dane.

It is wrong to put temptation in the path of any nation,
For fear they should succumb and go astray;
So when you are requested to pay up or be molested,
You will find it better policy to say: --

"We never pay any-one Dane-geld,
No matter how trifling the cost;
For the end of that game is oppression and shame,
And the nation that pays it is lost!"

Smith talks about just how disproportionate are the Shouters from everyone else.


It's important to realize that the Shouting Class isn't really that large. Most of the people out there in the world are not the kind of people you see commenting on your tweets or posting in your Facebook politics group.

In August of 2016, NPR disabled comments on their website, after finding the following:


I did find the numbers quite startling. In July, NPR.org recorded nearly 33 million unique users, and 491,000 comments. But those comments came from just 19,400 commenters, Montgomery said. That's 0.06 percent of users who are commenting, a number that has stayed steady through 2016.

When NPR analyzed the number of people who left at least one comment in both June and July, the numbers showed an even more interesting pattern: Just 4,300 users posted about 145 comments apiece, or 67 percent of all NPR.org comments for the two months. More than half of all comments in May, June and July combined came from a mere 2,600 users. The conclusion: NPR's commenting system — which gets more expensive the more comments that are posted, and in some months has cost NPR twice what was budgeted — is serving a very, very small slice of its overall audience.

The key issue here is that the Shouters are not representative of the whole population, they are not a random sample. They are a self-selected sample masquerading as a representative and they do so in order to win outsized influence. An important principle to remember is that of the The seen and the unseen from the eponymous article by Frédéric Bastiat in 1848. The squeaky wheel gets the grease is the adage that fits the bill.

Unmentioned by Smith, but I think pertinent to the discussion, is the serendipitous conjunction of academia's descent into postmodernism (deconstructionism, critical theory, etc.); the fruits of the self-esteem craze of the 90s and aughts; and the technological enablement of social media, all in the same window of time. Essentially we have snow-flake irrationalists amplified by social media technology. Not a pretty sight.

The modus operandi in social media is dominated by an emergent perspective:


There is no tolerance for a different mastery of the facts or a different interpretation. If your belief differs from mine, you are not only wrong but evil.

There is another aspect Smith doesn't quite tackle. With the rise of the heckler's veto on social media, exacerbated by postmodernism's self-censorship via political correctness, we have narrowed the Overton Window of what is acceptable for public discourse. To catastrophic effect. We see this in Rotherham, England where a decades long child sex trafficking ring was tolerated because citizens and the police both felt they were unable to speak of the subject owing to the ethnic aspect of the ring. Similarly in San Bernardino terrorist attack when suspicious neighbors felt constrained from reporting to the authorities.

The more you close the Overton Window, the more likely that the eventual social adjustment will be kinetic and destructive. It is like a geological fault. The stresses build over time. You can either have a vary large number of small plate slips, with frequent minor damage, or you can have a rare but major plate slip with corresponding loss of life and property damage.

A final point I would make is that the Shouting Class is a dynamic/phenomenon, not a fixed group of people. There may some portion for whom Shouting is a permanent attribute. I would wager that for most it is a transient phenomenon. The young shout more than the older, the unemployed than the employed, the vested over the disinterested. It may be 100 people driving most of the negative comments but, very likely, it is not always the same 100 people.

That's a lot of rambling. I think Smith is on to an interesting train of thought.