The B-52 Stratofortress is an amazing engineering marvel. Nearly sixty years old and being upgraded in a fashion that might mean they could close in on a century of service. An aircraft that will outlive all its original pilots. 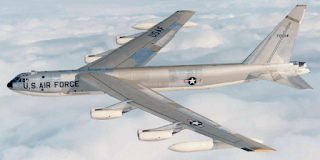 Brought to mind by Engine Upgrades, Digitization to Keep B-52s Flying Into 2050s by Vivienne Machi.

From the Wikipedia article:


The Boeing B-52 Stratofortress is an American long-range, subsonic, jet-powered strategic bomber. The B-52 was designed and built by Boeing, which has continued to provide support and upgrades. It has been operated by the United States Air Force (USAF) since the 1950s. The bomber is capable of carrying up to 70,000 pounds (32,000 kg) of weapons, and has a typical combat range of more than 8,800 miles (14,080 km) without aerial refueling.

Beginning with the successful contract bid in June 1946, the B-52 design evolved from a straight wing aircraft powered by six turboprop engines to the final prototype YB-52 with eight turbojet engines and swept wings. The B-52 took its maiden flight in April 1952. Built to carry nuclear weapons for Cold War-era deterrence missions, the B-52 Stratofortress replaced the Convair B-36. A veteran of several wars, the B-52 has dropped only conventional munitions in combat. The B-52's official name Stratofortress is rarely used; informally, the aircraft has become commonly referred to as the BUFF (Big Ugly Fat Fucker).

Icon of the Air by Thomas K. Grose has the fascinating details of the engineering life and times of this incredible platform. For example:


The storied Stratofortress might have stalled on the drawing board were it not for a handful of resourceful engineers who pulled off an 11th-hour rescue – almost literally from thin air. The day of reckoning arrived on Thursday, Oct. 21, 1948. Boeing’s engineering team was in Dayton, Ohio, presenting its latest design for the straight-wing, four-engine turboprop the Air Force had asked the company to develop. Conceived as a long-range nuclear bomber, the B-52 had hit turbulence almost from release of the first technical specifications in late 1945. Still, Boeing’s engineers were stunned when the project officer told them to scrub the propellers and produce an all-jet version. Joined by Boeing’s engineering chief, Ed Wells, and two colleagues fortuitously in Dayton on business, the team holed up in the Van Cleve Hotel and worked nonstop over a long weekend. They emerged with a 33-page proposal and an artfully crafted balsa-wood model of a swept-wing, eight-engine beast that could cover thousands of miles at high altitude.