Interesting that the results of this analysis are consistent with common social stereotype assumptions but with a population where there is no a priori reason to believe those stereotypes to be dominant; bright, competitive nerds. From A Statistical Analysis of the LearnedLeague Trivia Competition by Todd W. Schneider. Background description.


LearnedLeague players, known as “LLamas”, answer trivia questions drawn from 18 assorted categories, and one of the many neat things about LearnedLeague is that it provides detailed statistics into your performance by category. Personally I was surprised at how quickly my own stats began to paint a startlingly accurate picture of my trivia knowledge: strength in math, business, sports, and geography, coupled with weakness in classical music, art, and literature. Here are my stats through 3 seasons of LearnedLeague play:

I analyzed a total of 2,689 players, representing active LLamas who have answered at least 400 total questions. Each player has 19 associated numbers: a correct rate for each of the 18 categories, plus an overall correct rate.

It’s important to note that LearnedLeague members are a highly self-selected bunch, and in no way representative of the population at large. It would be wrong to extrapolate from LearnedLeague results to make a broader statement about how men and women differ in their trivia knowledge. At the same time, predictive analysis can be fun.

Schneider takes several tacks before he gets to the aspect that caught my attention. See the article for the methodological approach, but the result is a graph that ranks categories from most “feminine” to “masculine.” 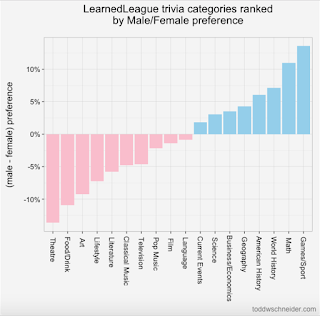