The New Yorker has been a long standing staple in our household. Among their features are, of course, their cartoons and in the past several years, they have included a running feature where readers can submit captions to cartoons. These are winnowed down to three contenders and readers vote on the caption they prefer. This example gives you the idea. A new contest, the three contenders for a recent contest, and the winner of an earlier contest. 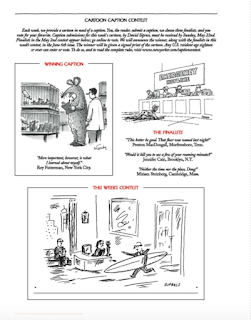 This weekend I purchased The New Yorker Cartoon Caption Contest Book. While I bought it for the humor, there is actually a fair amount of surprising information in it. One has to do with the sex of the participants. The New Yorker readership is 52% female. However, from page 6:

To put it in comparative language, 48% of Now Yorker readers are male but males constitute 85% of the participants, 75% of the finalists, and 76% of the winners.

I have no idea. Gross social stereotypes have males as more analytic than verbal oriented which would depress their participation but on the other side there is the stereotype of males being more humor oriented than females which would increase participation. Males are more risk taking and competition seeking than females which might be a factor. There is empirical evidence behind all of these stereotypes but whether they constitute much of a material effect size in real world circumstances is perhaps debatable.

I wondered whether there were any comparable activities to this which might shed some light. I came up with a comparable but I am not sure it sheds light.

From Xan Vongsathorn, Word Puzzle: Why is the Crossword Gender Gap Growing?


The topic of the debate is the large and growing gender imbalance in published puzzles. Like many fields, crossword construction is (and always has been) pretty male-dominated. But why is it getting worse, unlike so many other historically male-dominated fields? Apparently the percentage of puzzles with female bylines has plummeted from 35% (in the old days) to 24% (ten years ago) to 16% (now). A puzzle about puzzles!

His post outlines multiple possible causes for the observed trend but none seem compelling which probably means the answer is some combination of a weaker version of most of the arguments.

I do note that all the above numbers fit within the range I have observed in past posts. In competitive endeavors with material risk (social, financial, psychological, etc.) where there are real or public consequences, women represent 15-30% of the top performers in whatever the field might be. Not true all the time and everywhere but a useful heuristic none-the-less.

My guess for the explanation of the New Yorker numbers has several components. I am guessing that the language gap between the sexes is reasonably self-selected out for The New Yorker. In other words, if you are reading the New Yorker, you probably are already high-performing in the language arena and therefore differences between the sexes in language orientation are probably mooted among New Yorker readers. If that is true, then I suspect much of the gap might simply be explained by male competitiveness.

But that is pure speculation and grasping at straws but its all I have in the face of an otherwise reasonably inexplicable gap.