Two different sources of information lend their support to this contention.

First is from Gallup. This past week has had the emotionally academic/media/government complex at fever pitch with cries of treason and collusion. The New York Times worried about Trump and Putin meeting "behind closed doors" as if this were not bog standard for all meetings of state. The academic/media/government complex have been carrying a torch for Russian collusion ever since their Weltanschauung was unseated in 2016, despite the absence of any evidence after tens of thousands of man hours of investigation and tens of millions of dollars.

In the face of this existential threat as seen by the academic/media/government complex, what do most Americans think? How much of a threat is posed to us by Russia?

It literally does not rate. Gallup has fewer than one percent of Americans who identify Russia as among the most important problems facing the US.

Our establishment political class is among the worst ever, left and right. Our previous administration had eight years of failure to launch "recovery summers" and could never make the connection between the declining fortunes of Americans and the declining political fortunes of the administration. Economic concerns were rarely below 40% of all concerns, and reached as high as 86%. If the economy is bad, people's livelihoods are bad or at risk. Talk about transgender bathrooms, intersectionality, racism, open boarders, etc. all you want, if people are pinching the belt and worrying about their job, you are not going to command their attention.

There was an interesting article last year comparing the concerns of average Americans versus the amount of time the media spent reporting on those concerns. It makes a similar point. Over time, citizens tend to be primarily concerned about jobs, the economy, healthcare, taxes and security. Take care of those issues and they will focus on other priorities. Fail to address those issues and you are not relevant.

I put together a crude chart at that time: 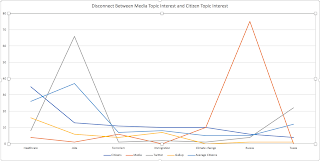 A year and a half into the new presidency, only 14% of citizens are concerned about the economy compared to the normal 40-60%. Citizens concerns about government have fallen by a third.

There is no polarization. Roughly the same small single digit number of people are concerned about race, unity and respect in July as were concerned in January. There is no deterioration of civility.

Meanwhile, citizen concern about immigration is at a recent high. Concern about gun control is a small fraction of its highest recent share. Concern about healthcare has fallen by half. Concerns about crime and national security are down by half. That is not the impression you would get from the (no longer) mainstream press. The press is concerned about collusion and treason and Russia and environmental catastrophe and global warming and social justice and gun control and liberalizing immigration. Things which barely register for citizens except when they oppose them.

A second data source that emphasizes the disconnect between the concerns of those in the academic/media/government complex and those in the rest of America is the most recent data from Real Clear Data, the results for President Trump Job Approval. We have had a solid week of nearly uniform and sustained vitriol from the press about the president. How has that affected the average American's perception of the president? It has made them fonder of Trump.


Look at the dates and compare the same poll. The summit was on the 16th.

Economist/YouGov took a poll for 3 days, including the summit day and the day after, and got a -8 spread, which isn't high, but if you look at its previous poll, the number was -9, so it was a 1-point improvement. The Reuters poll is partly after the summit, and the number is -12, up from -16. He's also rising in the Gallup poll but there, the newest poll (at -9, compared to an earlier -15) is all pre-summit.

Why would this be? It might be that the Trump critics sound so antagonistic that they seem less credible (or less watchable) than usual. Connected to that is the possibility that people want better relations with Russia and want to feel hopeful about improvements. Maybe people sense that the President is the voice of the nation with respect to foreign relations and accept the reality that Trump is the President.

Look at the trend lines. He is up 6 points YTD, a fifteen percent improvement. Sure, a lot of people disapprove of him, but even the disapproval is down ten percent (five points) from December 2017.

There is clearly a huge disconnect between what the public is concerned about versa what the academic/media/government complex would like them to be concerned about. There is also seemingly an emerging negative correlation between media opinions and the public's opinions. The harder the academic/media/government complex goes after the president, the more sympathetic the public appear to become to his performance. When you add to that mix that the president is more focused on the concerns of most interest to the public, then you have a recipe for another set of surprises.