A visceral rather than a considered response. In the news today there is this photo:

Teen is paraded down the street by police after 'recruiting other women to fight for ISIS' http://t.co/5kNpnyPqdw pic.twitter.com/QLyThBdP07

Which brought to mind what I recollect to have been a Time Life photo of a woman collaborator being paraded through the streets in a town in France after its liberation from the Germans. Googling, there are actually lots of pictures, it happened all over France, women who were deemed to have been collaborators. 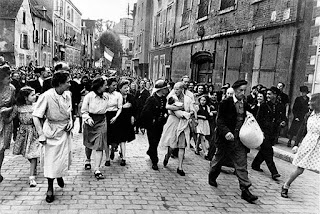 Recruiting for ISIS, if it is true, is a grave crime. But the parallels between the pictures is a call to remember that we humans are sometimes better at letting our emotions outstrip our rationality and reason. The rule of law is meant to help hold those emotional passions in check.