Very interesting data anlysis and history in Presidential Speeches Were Once College-Level Rhetoric—Now They're for Sixth-Graders by Derek Thompson.

Thompson relays the results from a study of the complexity of presidential speeches from Washington to Obama. Yes, yes, all speech measurement tools have some flaw in them but they do also serve a purpose.

Here are the results using the Flesch-Kincaid readability test. 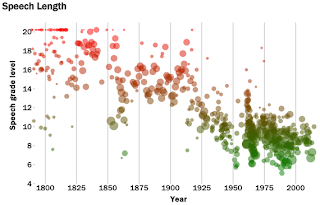 Presidential speeches have been declining in complexity since 1800, with a big drop in complexity circa 1925. How to interpret?
Thompson has a couple of other observations, but this is the one I found most interesting.


1. Presidential rhetoric is becoming simpler because the country is becoming more democratic.

“It's tempting to read this as a dumbing down of the bully pulpit,” says Jeff Shesol, a historian and former speechwriter for Bill Clinton. “But it’s actually a sign of democratization. In the early republic, presidents could assume that they were speaking to audiences made up mostly of men like themselves: educated, civic-minded landowners. These, of course, were the only Americans with the right to vote. But over time, the franchise expanded and presidential appeals had to reach a broader audience.”

Indeed, the major shift downward in presidential complexity happens around 1920, which coincides with at least four positive developments: (1) the 17th Amendment allowing direct election of senators in 1913; (2) the 19th Amendment giving women the right to vote in 1920; (3) the movement to make public education mandatory in the 1920s; (4) the invention of radio, which passed 50 percent penetration among US households by the 1930s. TV passed the 50-percent threshold in the early 1950s.*

Another way of putting this is that extending the franchise and achieving universal education leads to simpler, less complex communication. A great example of unintended consequences.

I wonder if this insight does not extend to other fields. Specifically, reading.

As the barriers to entry for both writing and reading have plunged to the vanishing point, has not, perhaps, the average cognitive density of books declined at the same time that reach has increased? Free blogging platforms and self-publishing software and Amazon associates, etc. all make it possible for anyone to write anything for anyone, anywhere. There are no gatekeepers.

In the environment of plenty, the challenges are different than those in times of constraint. When only 1,000 books were published a year, there had to be a lot of filters to ensure what got through warranted the cost of production. When the cost of production is near zero, anything of any quality or content can get through. Before the reader was challenged by a dearth of books. Now it is a surfeit. It is no longer a challenge to find a book at all. Now the challenge is to find a worthwhile book.